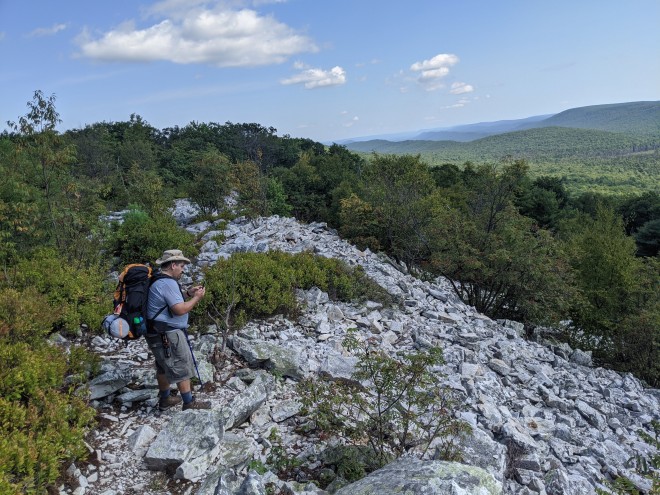 “We must learn to reawaken and keep ourselves awake, not by mechanical aids, but by an infinite expectation of the dawn, which does not forsake us in our soundest sleep. I know of no more encouraging fact than the unquestionable ability of man to elevate his life by a conscious endeavor. It is something to be able to paint a particular picture, or to carve a statue, and so to make a few objects beautiful; but it is far more glorious to carve and paint the very atmosphere and medium through which we look, which morally we can do. To affect the quality of the day, that is the highest of arts. Every man is tasked to make his life, even in its details, worthy of the contemplation of his most elevated and critical hour…

“I went to the woods because I wished to live deliberately, to front only the essential facts of life, and see if I could not learn what it had to teach, and not, when I came to die, discover that I had not lived. I did not wish to live what was not life, living is so dear; nor did I wish to practise resignation, unless it was quite necessary. I wanted to live deep and suck out all the marrow of life, to live so sturdily and Spartan-like as to put to rout all that was not life, to cut a broad swath and shave close, to drive life into a corner, and reduce it to its lowest terms…”

These words were written by Henry David Thoreau over one hundred and fifty years ago in his book, Walden. I read them and I wonder what Thoreau would say if he could see us now. The easy answer would be that he would feel pity over our incessant need to fill our few hours on this world with frivolity and meaningless wastes of time. But maybe he would marvel at our technological advances, that we have sent men to a heavenly body, landed automatons on Mars and Venus, that we have harnessed the power of the atom and created cures for diseases that have killed millions in his day. Perhaps he would weep over the state of war we all seem to perpetuate, not only with other countries, but with ourselves. He was alive to see the slaves freed, yet that we have not somehow managed to rid ourselves of its hatred would no doubt shock him.

I think perhaps wondering what Thoreau, Whitman, or any of the first Transcendentalists, those that gave our country it’s own unique voice, would say about our state of affairs shows that we have missed the point. Most of us have forgotten how to live deliberately and contemplatively. Our society has been so overwhelmed by our own cleverness that we have forgotten some of the most basic elements to life: Living, creating, and changing. We spend so much time absorbing what the world around is doing that we don’t stop and think about it. We don’t process the horror and beauty and despair and joy of what is occurring, we only register that it has happened, usually in the form of headlines or 140 character blurbs.

As a people, a country, we no longer drive life into a corner. Instead we find ourselves braced against the wall, hugging the turnbuckle of life as the world around us pummels us with useless information. And we love it. It’s instant gratification of whatever it is we need to know and whatever we want to know. And if we cannot get it immediately, we complain about the lack of quality in the system and then forget about what we wanted to know in the first place. It has made our minds weak, and even worse, handicapped our ability to think around a problem. Let me provide an example.

For many years, I was fortunate enough to live in the woods of Western Pennsylvania. Not the deep woods, mind you, but far enough in that it was a ten minute walk to my nearest neighbor. Many nights, before the advent of the internet and smartphones, I would gaze at the stars and learn their names. I would wonder about the universe and try to grasp infinity. Don’t get me wrong, I would also drink bad beer in those fields and go four wheeling, I’d clumsily try to put moves on girls and play video games in my home. I wasn’t a philosopher, I was a teenage kid, but the opportunity for me to contemplate existence was there, at times that’s all there was to do there, and often I took it. Recently I went back for the baby shower of a beloved cousin. The night before I sat outside and looked at the stars. Where I live now, the stars are poor, weak, uninspiring things. You look at them and are unmoved because the lights from the cities and suburbs have diminished them. Back at my mother’s home, they are still in their glory. I sat outside and tried to remember the constellations I knew so well in my youth. Before long my mother came out and joined me. We sat and chatted pleasantly, but there was more silence than talk and it was nice. I told her about how I enjoyed the sitting and puzzling things out, about how life has made us too hurried and reliant on technology and stuff we don’t need. I told her that I was enjoying trying to remember the names of constellations. Her response, “Oh, I have an app for that.”

I have one as well, but the point was I didn’t want it. Many of us have forgotten the joy of remembering something buried deep in your memory and working it out, instead of just googling it. Of just thinking about something until your mind is satisfied with it’s results. We have too much on our plates for such luxury. We are too busy with work and kids and facebook. We have meetings to attend, HOA’s to deal with, annoying neighbors to placate, and series to binge watch.  We no longer live deep and suck out all the marrow of life. We live shallowly and eat food the nourishes neither mind or body.

Recently in class, I tried to teach them about Transcendentalism and Chris McCandless, who was the inspiration for the book and movie, Into the Wild. This young man lived and died trying to suck out the marrow of life, a seemingly cautionary tale, but in those two years what a life he lived! While I have no desire to try and live in the wilds of Alaska, nor tramp around the United States, I wish to live more simply. To let go of some of the concerns of modern life and to enjoy what this fleeting existence has to offer more directly, more deliberately. I wish this for my children, who have so much stuff and distractions they don’t know what to do with themselves. I wish this for my family and friends, and I wish it for all of you. Go, put down your tablets and smartphones, leave digital society behind for awhile and find some place new. Find some adventure. Experience something and think about what it means, don’t just share it on twitter or instagram. Delve deep into the world, into the wild of people. It’s scary there, but the rewards are great.

One thought on “Finding the Means to Live Deliberately”